Immiticide is the only drug which has approval from the FDA for the treatment of heartworm in dogs.

Another name for Immiticide is Melarsomine. This drug should not be confused with the heartworm preventative medicines given to dogs.

It is only effective against adult heartworms, it does not affect the immature larvae which are killed by the preventative medicines and it MUST be administered by a vet.

Although Immiticide is a drug based on the poison, arsenic, it is much, much safer than the previous treatments with arsenic and unlike previous treatments, does not cause toxicosis (which is just another way of saying that it does not cause illness due to poisoning). However, this drug is not approved for any other animal than dogs and is not approved for human use.

If your dog is in need of Immiticide treatment, you may already be aware of the current Immiticide shortage in the United States, to read more, please use the link to visit our article about this.

Looking for more information about Heartworm Treatment with Immiticide?

What are the possible side effects?

Whilst, as stated above, this drug is a great deal safer than its predecessors, it does have some side effects, the most common of which is the blockage of blood vessels caused by dead worms getting carried along in the dog’s bloodstream. A blockage of this type is called a thromboembolus and when more than one is formed, they are called thromboemboli. Because of where the adult heartworms lodge, in the heart and the arteries around it, these thromboemboli are likely to form in the lungs (pulmonary thromboemboli) as dead worms get carried away from the heart – and can prove fatal.

Other side effects are not so serious and include pain and swelling where the injection of the drug has been administered, general malaise including fever and lethargy, loss of appetite and a cough. 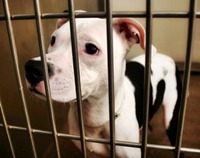 Worried About Keeping Your Dog Calm and Relaxed After Treatment?

Because of the risk of dead worms being carried into the lungs and causing an embolus, the dog must be kept very quiet and caged. With a lively and normally active dog, this is easier said than done. Many owners are reporting good results using either a D.A.P. Diffuser or a D.A.P. Collar. D.A.P. stands for Dog Appeasing Pheromone and it is the natural substance nursing mother dogs produce in their milk in the first few days of their puppies’ lives which makes them feel safe and secure. Giving your dog a diffuser near his cage or a collar to wear has been shown to reduce anxiety and to relax and calm your dog. These are natural products, recommended by Vets for behavioral problems and well worth a try if you are worried about how you will keep your dog quite and calm after treatment.

After the first few days the dog will probably be allowed out of the cage and will not be allowed to run or play for several weeks. When your dog has been checked following treatment with Immiticide, Ivermectin (a heartworm preventative drug) will be given to kill of juvenile larvae and your dog should remain on a heartworm prevention program for the rest of its life.