Hookworms are a very common parasite found in the intestines of domestic cats and dogs (and in particular, kittens and puppies). Fortunately monthly heartworm treatment medications also deal with these worms so if your dog is on Heartgard plus, Iverhart plus or any of the medicines that contain Pyrantel Pamoate this will certainly control the worms but may not eliminate them altogether.

In addition, as very young puppies can get hookworms too, before they are old enough to start heartworm prevention, there are medicines available to sort out the problem when the puppy is as young as two weeks. 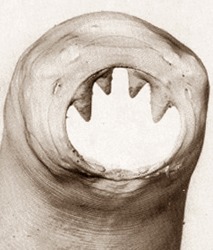 This magnified image of a hookworm head shows the teeth-like structures which it uses to attach itself to the lining of the intestine.

Hookworms are particularly nasty parasites, around half to three quarters of an inch in length, that have structures in their mouths which work like teeth to latch onto the intestinal walls and unlike roundworms that feed on undigested or partly digested food in the intestinal tract, these nasty little pests feed on your pet’s blood and can cause very unpleasant consequences including anaemia and diarrhoea.

In addition, these worms can also be transmitted to humans. The strain of Hookworm called A. Caninum or the Canine hookworm can cause an infection of the intestinal tract in people, this gives rise to a condition causing stomach pain called ‘eosinophilic enteritis’.

Another strain of the worm called A. Braziliense which normally affects cats and dogs can get under the skin of people and cause a skin desease that is known as cutaneous larval migrans. The latter is more common in tropical and semi-tropical areas of the world. 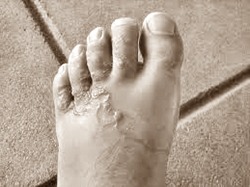 Hookworm infection caused by the A. Braziliense strain of the worm.

As with roundworms, you dog can become infected from soil contaminated with the faeces of infected dogs, except that the larvae have already hatched by the time they are ingested. They can also enter the dog by burrowing through skin. Another method of contamination is if your dog is a hunter and eats another animal, usually a rodent that has hookworms. Puppies can be infected before they are born from an infected mother. After birth, the worm larvae can also be passed to puppies from their mother’s milk.

The signs of hookworm in your dog are particularly severe if the infection is with A. Caninum as by feeding on the blood of your dog, the worms can cause anaemia. Black, sticky or tarry faeces may be passed as when the worm attaches itself to the lining of the intestine, it continues to feed by making an anti-clotting agent in its saliva. If it moves to another area of intestinal lining to feed, the original area will continue to bleed due to this anti-coagulant and then the blood is passed out in the faeces creating the black and sticky appearance. Another sign of anaemia to be on the lookout for is pale gums.

Untreated, an infection with these worms can lead to death as the dog may have such a burden of larvae in its lungs that it develops pneumonia. Young puppies with severe worm burdens do not grow well, look emaciated and have dry, lustreless coats.

Your vet will diagnose hookworm infection by looking at a sample of faeces from your dog. The vet may request you to refrigerate a sample of faeces right after your dog ‘performs’ as he needs a sample before the eggs hatch out and, if the weather is warm, this happens pretty quickly. Once an infection has been confirmed, he will prescribe treatment which needs to be pretty rigorous as these worms do not let go without a fight! An initial dose is followed in two weeks by a second treatment.

The medicines used will only treat worms and larvae in your dog’s system, they do not have a preventative effect so a checkup every three or four months is needed until the stool tests come back negative. As mentioned earlier in this article, monthly heartworm prevention treatments usually control the problem of hookworms.

Because of the risk of re-infection of your dog and of other animals and pets, you must always pick up faeces and dispose of them safely. This is even more vital where children play as children are more likely to become infected than adults. Good hygiene will protect your family and help to protect your pets (and your wallet from unnecessary vet bills).