Dog ear mites are most common in puppies as they are passed from mother to her young. Infection with these mites is also commonly found in dogs in shelters. Some animals seem to be remarkably unbothered by having these parasites whilst others will demonstrate head shaking and scratching of the ears because they are so itchy. Otitis, an inflammation of the inside of the ear can result and the ear flaps can get very inflamed. Inside the ear canal of an infected dog, you can often see a rather unpleasant waxy sort of discharge resembling the coffee grounds you tip out of the coffee maker! This can also have a nasty smell because of infection which results from the inflammation and your dog’s efforts to rid himself of the irritation by scratching. 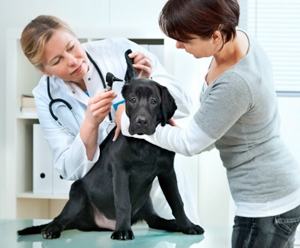 It is important that you do not try a DIY solution for this problem because whilst the symptoms described above are caused by dog ear mites, they can also have other origins. It is important that you allow your vet to test for ear mites to verify that this is, in fact, the cause. Testing is a very simple procedure and only involves using a small tool similar to a cotton bud to remove a little of the waxy discharge and then examine this under a microscope. If present, the mites show up as white specks, like little pinheads moving about. Your vet might only need to shine a light into your dog’s ear with an otoscope in order to see the mites moving about and detect the presence of eggs. 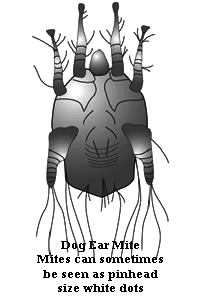 The type of mite that affects both dogs and cats is called Otodectes cyanotis and under the microscope, they look like tiny eight legged spiders or crabs. They feed on the debris of dead skin cells and fluids in the ear wax found in the ear canal. It is important that if you have more than one pet that when one is found to have ear mites, all your animals are treated to prevent re-infestation because adult ear mites are quite mobile and can survive outside of the ear for some time and travel to a new host. Even if you only have one dog, it is very important that you restrict its contact with other animals to avoid spreading the infection.

Once the presence of mites has been confirmed, the first stage of dog ear mites treatment is to clean the ears to remove the build up of the waxy discharge. After this, your vet will supply a topical preparation which will need to be carried on even after you think you have eliminated the problem as there may still be eggs and larvae developing. Two weeks after the last sign of adult mites is usually sufficient. 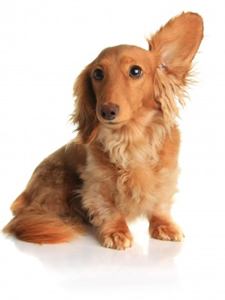 During dog ear mites treatment, you should also use a flea treatment product. This will get rid of any dog ear mites that have migrated onto other parts of your dog’s body (most usually, the neck, the hind quarters and the tail). Revolution for dogs is a treatment which also controls ear mites and can be used for this purpose. You have to be meticulous about hygiene and treat your dog’s bed and bedding too. All this will have to be repeated after 21 days to ensure that any developing ear mites are also killed before they can cause problems.

It is quite important to check your dog’s ears regularly for signs of mites – even if he is showing no signs of discomfort or itching. This is because if an infestation with ear mites becomes severe, other problems such as yeast or bacterial infections can set in which will also need treatment.

Occasionally the inflammation inside of a dog’s ear becomes so severe as a result of dog ear mites that the ear drum itself perforates and an ear infection in the middle ear becomes established which is extremely distressing and unpleasant for the dog and will probably cause balance problems and head tilting.

Dog ear mites do not burrow in the skin as some mites do and are a relatively easy problem to resolve.

However, dog ear mites treatment should be carried out under veterinary supervision and it is very important to carry on the treatment for the time your vet advises even when you think your pet is completely clear of the adult dog ear mites to prevent him becoming re-infected with the next generation that will be still developing.