Heartworm in dogs is a growing problem in the United States. One of the main reasons that this disease is so prevalent is the fact that only 50 percent of dog owners provide heartworm prevention for dogs. The second factor leading to the increase of heartworm in dogs is the increasing population of mosquitoes. Mosquitoes are the vector transmitting heartworm larvae to animals.

Traditionally, heartworm in dogs was a problem in the south-eastern and Gulf Coast States such as Florida, Mississippi, and Louisiana. The wet climate and high humidity is a perfect breeding ground for mosquitoes. 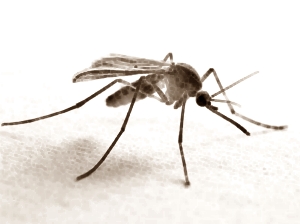 Many of the south-eastern and gulf states are experiencing an increase in the mosquito population. Experts attribute the growing population to a variety of factors.

Many states have experienced higher temperatures during the summer and winter months. Since the states do not experience a hard freeze during the winter, many insects are not killed.

This leads to growing populations of mosquitoes, fleas and ticks.

Hurricane Katrina not only destroyed many areas in Louisiana and Mississippi, it created a breeding ground for mosquitoes. Both of these states have high rates of heartworm in dogs. In addition, up to 60 percent of pet owners in these two states do not provide heartworm prevention for their dogs. Many of the dogs that were rescued after Katrina were already infected and thousands of people relocated to other States with infected animals. 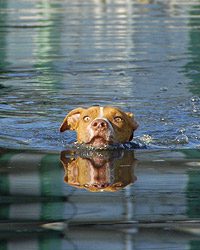 This powerful image of a dog caught in the flooding after Hurricane Katrina is from www.charlierandallpetfoundation.org

When people move with an infected animal to another part of the country, they unknowingly contribute to the spread of heartworm disease. Mosquitoes will bite the infected dog and will eventually transmit larvae to other dogs. In the past, this devastating disease was confined to the humid southern states. Today, they have been detected in every state including Alaska.

The colder northern states are experiencing and increase in the number of infected dogs. This is attributed to people moving to these states with dogs that may already be infected and to an increase in temperature during the summer months over the past several years. Heartworms need the mosquitoes in order for them to complete their lifecycle as larvae. The optimum temperature for the larvae to develop in the mosquito is 27 °C (80 °F) or above. Since many colder states have experienced several weeks of temperatures above 27 °C, this is leading to an increase in the population of mosquitoes and consequent heartworm infections in these states.

Changing weather patterns and abnormally high temperatures have increased mosquito populations and the incidence of heartworm in several states that previously had few cases. Currently, the Cibola Beacon in Grants, New Mexico, published an article regarding the increase in the mosquito population in the area and the current vector control program. The town of Grants is in an area referred to as the “bad lands.” This area is a dry desert climate. While the temperature during the summer months is well above 27 °C, the area has low humidity and low rainfall. This would seem an unlikely place for mosquitoes to thrive. While the current incidence of heartworm in dogs in this area is very low, the rising mosquito population is cause for concern. 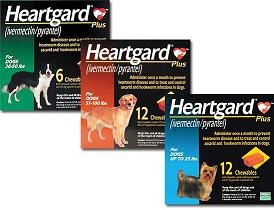 Many people in the United States believe they live in areas that are safe from mosquitoes and heartworm disease. Unfortunately, research from the American Heartworm Society demonstrates that the disease is spreading to most areas of the country.

Veterinarians make every effort to promote preventative treatments to their clients. However, the number of pet owners that provide treatment for their dogs remains at 50 percent. This statistic is disappointing and is a contributing factor in the spread of heartworm disease.

When pet owners are asked why they do not use preventative treatments, most state they feel it is unnecessary or too expensive.

The current cost of treatment for heartworm in dogs that are infected with adult worms has increased to a staggering national average of $820. In addition, the danger, pain and stress on the dog is tremendous. Preventative treatments are sold in many pet supply stores and online at significant discounts. Many of the heartworm preventative medicines also contain medicine to prevent infections of other types of worms, fleas and ticks.

Convincing owners that protecting their pet from heartworm in dogs with preventative medicine is crucial in protecting their beloved family member is a challenge for veterinarians. Sadly, many dog owners will learn the hard way – and maybe too late, when they find that their dog has become infected.

While the problem in the United States continues to grow, it is important to mention that heartworm disease has become an increasing problem in southern Europe, Japan, South America, Australia and the Middle East. If pet owners are not diligent in protecting their pets, heartworm in dogs may become prevalent in areas that currently do not have a significant problem